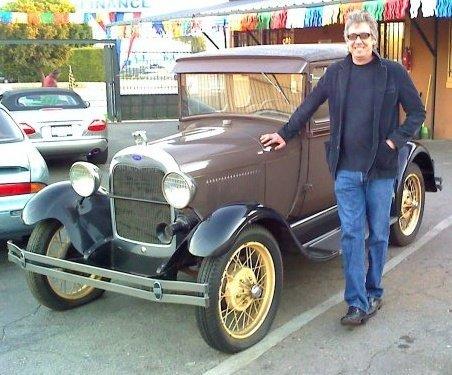 I received a call from a woman who saw my website www.dennisbuyscars.com. She asked me if I was interested in a Model A Ford. She seemed pretty knowledgeable about the car's value and pretty much told me what she wanted for it and probably wouldn't budge on price. Nonetheless, I was interested and booked the appointment.

I pulled into the driveway in the trailer park of my destination I was enthusiastically greeted by a friendly man in his fifties who obviously had Downes Syndrome or some type of mental impairment. With him was a well dressed man in his late sixties holding a clipboard and a fast talking, disheveled looking woman in her forties with a Marlboro dangling from her lips who appeared to be on some form of medication.

Whenever I show up at prospective customer's door with large amounts of cash hidden somewhere on my person I have to be very careful. This was an interesting but very diverse group so some quick anthropological triage was in order so I could figure out who was who.

It turns out that the ringleader of the group and car owner was my little impaired friend who I will call Bud. Mr. Clipboard, whose family owned the trailer park, explained to me that ten years ago, at eleven o'clock at night, there was a knock on Bud's trailer door. Outside were a lawyer and a flat bed truck upon which was this gleaming 1929 Ford Model A. Apparently Bud had a 100 year old Aunt that he never knew about, die and leave him this car which she had since new, some property and some annuities. The probate attorneys tracked him down. "Yup, it's all true!" Bud piped in.

Mr. Clipboard's involvement was that he agreed to help with the transfer, had the title in his name and was present to make sure everything went according to Hoyle. Ms. Marlboro was the girlfriend and I'm going to go out on a limb and guess that happened within the last ten years. She was quite clearly the family accountant who put herself in charge of the negotiation. We agreed on a price, counted out the cash and signed the paperwork on the hood of my new Model A.

This was actually a very amazing car. It was completely original and after a few minor adjustments we got it running like a top. I had a blast driving it around Los Angeles for the short time I owned it.

I then put it on Craiglist and eBay. I got a call from an Australian buyer on my cell phone as I was driving it home one night. I told the caller, "Do you realize that I am driving this 80 plus year old car right this minute. Through modern technology, my voice is being transcripted into a bit code by a computer, bounced off of a satellite in stationary orbit 22,500 miles above the planet earth, sent to a computer in Australia where it is converted back to voice, then to your ear piece? In addition, you viewed the pictures on the Internet which were uploaded from my digital camera and soon I will be sending you an email with instructions on how to send the money via an electronic transfer.

"Hang on one second. I have to put the phone down. Shifting this crash box transmission while adjusting the distributor advance and throttle on the steering wheel is a two handed job!"

back to Car Buying Stories

8931 Venice Boulevard Los Angeles, California USA 90034
at the crossroads of Los Angeles, Beverly Hills and Culver City
off the I-10 Freeway @ Robertson map

WHAT OUR CUSTOMERS SAY:
View All Testimonials

We Buy Classic Antique and Vintage Cars American and Foreign