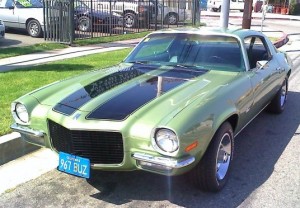 At Dennis Buys Cars we are always on the lookout for interesting classic cars, trucks and motorcycles. When someone inherits a classic car for example, has one for sale or just wants to know what their classic car is worth they will do an online search and usually end up at Dennis Buys Classic Cars.

For a two year period of time, every six months or so I would get a call through the Classic Car Buying division of our website from a woman interested in selling her classic 1970 Chevrolet Camaro. She explained to me that it was her mother’s car who bought it brand new in Los Angeles and that it only had 80,00 miles on it. This is the Holy Grail of car buying “back stories” and it had every desirable ingredient; a “little old lady” owner, original engine, low mileage, California car since new verified by it’s original license plates and had never been painted.

Regardless of what the purist say, to me this is the most beautiful year for Camaros so I was very interested.

On her first call to us she wanted a huge amount of money for it and I told her I was just not interested. She called again a year later and her price came down somewhat but not to the extent that I could buy it. I educated her on the value and she said she would get back to me. After more time and a couple of more calls I gradually brought her down to reality.

We now had a reasonable price range established so she gave me her address in West Hollywood and we set up an appointment for the next morning.

Having lived in that area I knew that the address she gave me was a large apartment complex. The curiosity was killing me so I decided to drive over there the night before the appointment to see if I could have a peek in the garage.

Sure enough, way over in the corner, visible through the gate was this unpolished gem of a car. Why were all cars from this era that putrid color green? A tenant was coming home from work at that moment, the automatic door opened, so naturally I slipped in to have a better look.

I walked around the car feeling like a cat burglar and the car was in amazingly original condition. It still had it’s original hubcaps, the era correct “Vintage California Plates” and the paint was 100% original but very faded from the California sun. The upholstery had a few rips and tears, the tires were great, it sat very well and most importantly it had no rust anywhere that I could see. This car had what we call “great bones” and would be an easy restoration.

But now I had a problem, I couldn’t get out of the garage. It seems that that automatic door was controlled by a thick, black rubber hose that would be activated only by the weight of an exiting car. No matter how hard I jumped on it I couldn’t get the door to open! There was no pedestrian exit door, no electronic sensor or button and the door to the lobby required a perimeter key. I was trapped!

I had to wait a full 30 minutes until someone came home and when the gate opened I was finally able to sneak out.

The next morning I met the woman. She was in her fifties, she had waist long, curly blonde hair which didn’t seem to match her age and was wearing a Little House on the Prairie dress, swear to God. She was a little nervous and very emotional about selling this car. “My mother used to drive me to High School in this car,” she said.

We struck a deal but when I produced the cash and the forms to sign she said she wanted to go to her bank, do the transaction at a bank officer’s desk and have him confirm that the bills were genuine. This was a first for me but of course I agreed.

When we got back to car I told her I would arrange to have a tow truck come and pick it up later in the day. “No need for that it runs great!” she said.

I jumped in, she was right, it fired right up and I drove my new Camaro back to Dennis Buys Cars to begin the restoration.

Thanks for looking, Dennis Goddard